The snails and slugs belong to the large group of animals known as the molluscs. This group or phylum is second in size only to the arthropods and, as well as the snails and slugs, it includes the squids and octopus and all the aquatic bivalves, such as the cockles and mussels. These are all soft bodied animals without internal skeletons, but the majority of them have some sort of shell which both supports and protects the body. Within the molluscs, the snails and slugs belong to a group called the gastropods, a name which means 'belly feet' and which refers to the way in which the animals creep about on their bellies. The slugs have descended from various groups of snails through the reduction or complete loss of the shell, but their modes of life remain virtually the same.

If you were asked to select the most nuisance pest in a garden, most people would nominate the "SLUG", which is understandable, because they are very abundant in a garden and there are several species which are the culprits, and that can be found chewing our plants. But, actually they don't do as much damage as one might imagine. Most of them prefer to eat decaying plant matter, and parts of the plants which are not used for human consumption. Slugs are really no more and no less than snails which have almost or quite lost their shells. They have also lost their visceral humps (the part of the snail which is inside the shell) and this means that the digestive system and other internal organs have to be packed into the head-foot, but the biology of the slug remains essentially the same as the snail. The mantle still covers part of the body and, as in snails, it encloses the lung. A few slugs retain a small shell at the hind end (see Testacella baliotidea), but the shell has been reduced in most species to a very thin plate or just a few chalky granules embedded in the mantle.

As water is quickly lost from the slug's soft, moist and unprotected body it lives in damp places in the soil and among debris. It emerges only at night or on wet days. A slug's organs of smell are in its tentacles and enable it to detect food several feet away.

Although a hermaphrodite, the slug rarely fertilises itself, and usually mates with another animal after an elaborate courtship.

With no portable home into which they can withdraw, the slugs are more susceptible to drought and to enemies than the snails, although they protect themselves to some extent with various kinds of mucus. Many species are active all through the year as long as the weather remains kind, but during very dry or very cold weather they tunnel down deep into the soil. Some species live most of their lives in the soil, but most of them are surface feeders and they come out to feed at night or when the air is damp after rain. They dislike rain falling on them, but often emerge in their thousands as soon as it stops and this when they are most likely to be seen crawling on paths and vegetation. The lack of a shell does have one advantage however, and that is that slugs are able to colonise the sandy soils denied to the lime-requiring snails.

Close examination of slugs will often reveal numerous minute creatures running all over their bodies. These little creatures are mites (see Parasites of Man) and they tend to be more frequent on the keeled slugs than on other groups. They don't seem to be hindered by the mucus that coats the slugs and they probably feed on it. The slugs are certainly not inconvenienced by their little passengers and don't so much as cough when the mites scuttle in and out of their breathing pores.

Although slugs have descended from snails, they have not all descended from one group of snails and they are not all closely related. Our British slugs belong to three very distinct groups: the shelled slugs, the keeled slugs and the round backed slugs. They total about 24 British species, and about half of these turn up in the garden from time to time.

But, what concerns us here is when slugs encroach into our environment....you know you've got that beautiful scarlet carpet in the living room...and oops!!...when you come down one morning there they are...lots of slug trails all over it!! No matter where you look, you can't find a slug anywhere. Well that is because they squeeze into the smallest crack or crevice and they are virtually impossible to find during the day. The only time to go slug hunting is a night...So armed with your torch and your 357 magnum at about 11 or 12 at night you will probably find the offender or, more likely, offenders merrily skipping around your living room..well, maybe not skipping, but you know what I mean.

Everyone knows about slug pellets, and nearly everyone, when they use them, scatter slug pellets around like they were confetti, which, as with any poison this is not recommended. When carrying out any treatment, it should always be targeted on a specific area and NOT blanketed so that everything is covered, this applies to any form of pest control.

Slug pellets contain a chemical called Metaldehyde structure shown below click on metaldehyde for full information about this chemical: 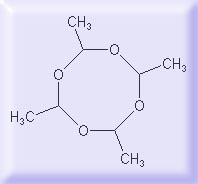 if any of you are ex-servicemen you will have used this chemical in the form of solid fuel blocks used for cooking on in the field. Also available these days is a slug paste which allows even more specificity in that it can be inserted into cracks and crevices.

Really the best method of controlling slugs is to pick them up by hand, it is amazing how much the general population can be reduced by this method, even in the garden (So Alan Titchmarsh says...).

Back to main Casual Intruders page