Permethrin is a broad spectrum synthetic pyrethroid insecticide, used against a variety of pests, on nut, fruit, vegetable, cotton, ornamental, mushroom, potato, and cereal crops. It is used in greenhouses, home gardens, and for termite control. It also controls animal ectoparasites, biting flies, and cockroaches. It may cause a mite buildup by reducing mite predator populations. Permethrin is available in dusts, emulsifiable concentrates, smokes, ULV (ultra-low volume), and wettable powder formulations.

Regulatory Status: Permethrin is a moderately to practically non-toxic pesticide in American EPA toxicity class II or III, depending on the formulation. Formulations are placed in class II due to their potential to cause eye and skin irritation. Products containing permethrin must bear the Signal Word WARNING or CAUTION, depending on the toxicity of the particular formulation. All products for agricultural uses (except livestock and premises uses) are Restricted Use Pesticides (RUPs) because of their possible adverse effects on aquatic organisms. Restricted Use Pesticides may be purchased and used only by certified applicators. 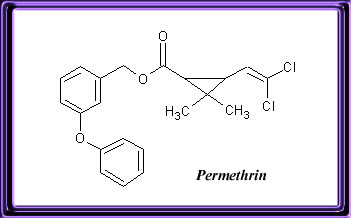 LD50/LC50: Permethrin is moderately to practically non-toxic via the oral route, with a reported LD50 for technical permethrin in rats of 430 to 4000 mg/kg. Via the dermal route, it is slightly toxic, with a reported dermal LD50 in rats of over 4000 mg/kg, and in rabbits of greater 2000 mg/kg. Permethrin caused mild irritation of both the intact and abraded skin of rabbits. It also caused conjunctivitis when it was applied to the eyes. The 4-hour inhalation LC50 for rats was greater than 23.5 mg/L, indicating practically no inhalation toxicity. The toxicity of permethrin is dependent on the ratio of the isomers present; the cis-isomer being more toxic.

In human beings permethrin is efficiently metabolized by mammalian livers. Breakdown products, or "metabolites," of permethrin are quickly excreted and do not persist significantly in body tissues. When permethrin is administered orally to rats, it is rapidly metabolized and almost completely eliminated from the body in a few days. Only 3 to 6% of the original dose was excreted unchanged in the feces of experimental animals. Permethrin may persist in fatty tissues, with half-lives of 4 to 5 days in brain and body fat. Permethrin does not block, or inhibit, cholinesterase enzymes.

Effects on birds: Permethrin is practically non-toxic to birds. The oral LD50 for the permethrin formulation, Pramex, is greater than 9900 mg/kg in mallard ducks and greater than 13,500 mg/kg in pheasants.

Effects on aquatic organisms: Aquatic ecosystems are particularly vulnerable to the impact of permethrin. A fragile balance exists between the quality and quantity of insects and other invertebrates that serve as fish food. The 48-hour LC50 for rainbow trout is 0.0125 mg/L for 24 hours, and 0.0054 mg/L for 48 hours. The 48-hour LC50 in salmon is 0.0018 mg/L. As a group, synthetic pyrethroids were toxic to all estuarine species tested. They had a 96-hour LC50 of less than or equal to 0.0078 mg/L for these species.

Effects on other organisms: Permethrin is extremely toxic to bees. Severe losses may be expected if bees are present at treatment time, or within a day thereafter. Permethrin is also toxic to wildlife. It should not be applied, or allowed to drift, to crops or weeds in which active foraging takes place.

Breakdown in soil and groundwater: Permethrin is of low to moderate persistence in the soil environment, with reported half-lives of 30 to 38 days. Permethrin is readily broken down, or degraded, in most soils except organic types. Soil microorganisms play a large role in the degradation of permethrin in the soil. The addition of nutrients to soil may increase the degradation of permethrin. It has been observed that the availability of sodium and phosphorous decreases when permethrin is added to the soil. Permethrin is tightly bound by soils, especially by organic matter. Very little leaching of permethrin has been reported. It is not very mobile in a wide range of soil types. Because permethrin binds very strongly to soil particles and is nearly insoluble in water, it is not expected to leach or to contaminate groundwater.

Breakdown in water: The results of one study near estuarine areas showed that permethrin had a half-life of less than 2.5 days. When exposed to sunlight, the half-life was 4.6 days. Permethrin degrades rapidly in water, although it can persist in sediments. There was a gradual loss of toxicity after permethrin aged for 48 hours in sunlight at 0.05 mg/L in water.

Breakdown in vegetation: Permethrin is not phytotoxic, or poisonous, to most plants when it is used as directed. Some injury has occurred on certain ornamental plants. No incompatibility has been observed with permethrin on cultivated plants. Treated apples, grapes, and cereal grains contain less than one mg/kg of permethrin at harvest time.

Back to Main Insecticide Page