Red Squill is a scilliroside and is a rodenticide in the glycoside family of chemicals. It is a botanical compound extracted from the bulb of the Mediterranean squill plant (Urginea maritima) see below. Scilliroside is a bright yellow crystalline solid. It is hydroscopic and non-corrosive. Scilliroside is sensitive to heat and should be used at temperatures below 80°C. Its shelf life is one to five years if it is protected from strong light and low pH conditions. Use discontinued in the U.K. 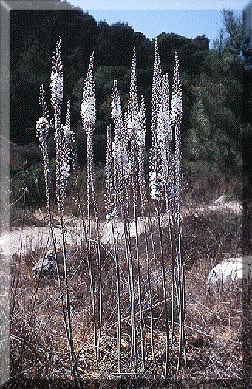 Most effective against Norway rats, it was also used to control black rats, house mice, long-tailed field mice, and field voles.It was classified as Toxicity Class I- highly toxic. Products containing scilliroside bore the Signal Word "Caution". It was available as a ready- to-use bait or as granules. Scilliroside production was discontinued worldwide in 1980, but in some ways it was a good rodenticide as it wasn't effective with other mammals. Red squill is specific for rats and nontoxic to other warm-blooded animals when used in recommended dosages. The specific toxicity to rats is due to their inability to vomit while the product induces vomiting in other animal species.

Scilliroside affects heart muscle contractions. It is also a potent emetic in most mammals, causing them to vomit and avoid absorbing the toxin. It is specifically toxic to continuous feeders like rats because of their inability to vomit. Rats are relatively resistant to the cardiac actions of scilliroside. Instead, they show protracted convulsions and muscular weakness at doses of 1.5-2.0 mg/kg intraveneously. Cardiac glycosides, like scilliroside, may also cause nausea, vomiting, headache, abdominal pain, confusion or convulsions.

Fate in Humans and Animals: Cardiac glycosides, such as scilliroside, are metabolized by the liver, excreted into the intestine and then absorbed into the blood. Intestinal flora may also play a role in metabolism, causing large variations in fate among exposed individuals. It may also be eliminated, unmetabolized by the kidney. The half-life in the body is from five to six days.

Back to Main Rodenticide Page