Flocoumafen is chemically related to brodifacoum ; it is – an off – white powder, almost insoluble in water, slightly soluble in alcohols and soluble in acetone. It is recommended for use at 0.005% in loose grain baits and wax–bound cereal blocks.

The modern 2nd generation anticoagulant rodenticides such as Flocoumafen have proven severe secondary poisoning properties and have been held responsible for the deaths of many birds of prey, particularly rare Red Kites and Buzzards that habitually feed off dead bodies. For this reason the use of these pesticides outdoors is illegal in the UK (although not yet in other parts of Europe), however many rodents just enter buildings to feed then retreat back outside to nest where it is quieter and safer. Most pesticides used in food factories end up in the environment somehow, either as run off into drains and water supplies, or accumulating in dead bodies of rodents or old or dirty rodent bait waste incorrectly disposed of. 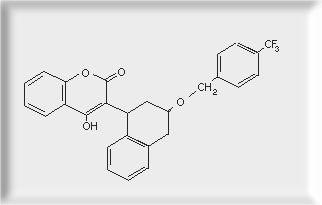 LD50/LC50: The acute oral LD50 values have been determined to be 0.4 mg/kg for male laboratory R. norvegicus and 0.8 mg/kg for male laboratory M.musculus. The LD50 for male rats compares favourably with that for brodifacoum of 0.3 mg/kg, making flocoumafen the second most toxic anticoagulant to R. norvegicus. "No–choice" tests on a homozygous Welsh strain of warfarin–resistant R. norvegicus and resistant house mice killed all animals after only one day of feeding at 50 ppm active ingredient. Field trials in England using flocoumafen at 0.005% against M. musculus showed no further bait consumption 16 days after the bait was first laid and no further activity at the end of 24 days. Resistance has already been reported to flocoumafen in a Norway rat population in the United Kingdom.

The second generation anticoagulants have proved so lethal to susceptible rats and mice on one feeding that an alternative baiting strategy has been developed, known as pulsed or minimal baiting. The strategy is to use a large number of small baits (5–15g) in a once every 5–7 days baiting schedule, placing the small baits at all sites where large quantities of first–generation anticoagulants normally would have been laid. The purpose is to minimize the possibility of excessive bait consumption by any one rodent. This also exploits the extreme toxicity of the newer rodenticides by using minimum amounts of bait to achieve a satisfactory kill, instead of the saturation amounts (200 to 500g) laid when using first generation anticoagulants. The effect of this baiting strategy is that after one baiting up to 75% of the initial population should be dead or dying after one week: a second "pulse" or baiting reduces the surviving population again by 75% and a third "pulse" after 14 days gives a final mortality leading to near–extinction (98.5–100% mortality). Field trials using "pulsed" baiting methods have shown its effectiveness in a variety of habitats. Its advantages are that there is a considerable saving in both labour and bait costs to achieve the same level of control as saturation baiting. The safety for primary and secondary non–target species in laying much less bait per unit area is another consideration.