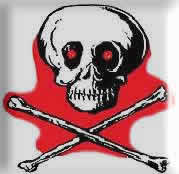 Sodium Fluoroacetate (1080) is a water soluble salt of very high mammalian toxicity which is used mainly as a rodenticide. It is rapidly absorbed from the gastrointestinal tract but is not readily absorbed through the intact skin. Usually marketed as an aqueous solution containing 0.5% nigrosine as a black warning colour, which is used to prepare baits. In the United Kingdom it is formulated as a 5% solid concentrate and a 0.375% bait for dilution with water to 0.25%. Sale and use are under strict control. Throughout the world it has been used to control rats, mice, squirrels, prairie dogs, coyotes, rabbits, it has also been used to control wallabies and rooks. Has been used experimentally as an insecticide, herbicide and repellant, but is no longer used for these purposes.

It is rapidly absorbed from the gastrointestinal tract, the oral route being the most important in cases of poisoning. Dust formulations are easily absorbed by inhalation. But it is not readily absorbed through the intact skin but it may be absorbed in the presence of cuts or dermatitis. It works by blocking the Krebs cycle by the formation of fluorocitric acid which inhibits aconitase and results in the accumulation of citric acid. The fluorocitric acid is itself very highly toxic, and therefore sodium fluoroacetate can cause secondary poisoning, i.e., poisoning in an organism which has consumed a part of an organism already poisoned. The Krebs cycle is the way every cell in the body respires. 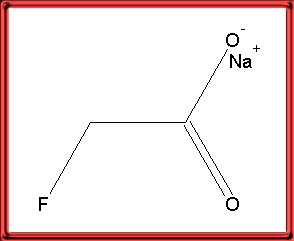 JUST THE TREATMENT OF THE SYMPTOMS

Symptoms and signs: there is a variable latent period ranging from 30 minutes to two hours between ingestion and appearance of symptoms. The first indication of poisoning is nausea and mental apprehension with facial twitching and numbness, generally followed by epileptiform convulsions. After a period of several hours pulsus alternans may exist followed by ventricular fibrillation and death. Children appear to be more subject to cardiac arrest than to ventricular fibrillation.

Treatment (by a doctor): treatment for sodium fluoroacetate poisoning is mainly symptomatic. If ingested, vomiting should be induced immediately followed by gastric lavage with two to four litres of tap water and instillation of 15-30 g of saline cathartic. Monoacetin (glyceryl monoacetate) 0.5 mg/kg should be injected IM every half hour for 12 hours varying the injection sites. Artificial respiration with the assistance of oxygen may be required. Calcium gluconate, 2-3 g per day in 10% solution may be given IV. To control convulsions barbiturates (preferably phenobarbitone or pentobarbitone) should be given IM or IV in sufficient dosage.

Prognosis: if the patient survives the first 24 hours after ingestion of sodium fluoroacetate the chances of complete recovery are favourable.

The use of sodium fluoroacetate should be restricted to sewers, ships and other structures where the operator can completely control the rodenticide and the environment. It has been used, for example, in feed mills during weekends, where the treated premises were locked, patrolled, and all bait stations accounted for. Excess poison bait, bait containers and rat carcasses should be disposed of by incineration or deep burial. Generally speaking 1080 is not used in this country now except with a special licence.

Pest controllers using this substance should observe the strictest of safety procedures and ensure that the correct Personal Protective Equipment (PPE) is used.

Great care is required when handling bait and contaminated equipment. The greatest hazard to technicians is when handling the concentrated mixture. During a days work, a technicians clothes could absorb many fatal doses. It is therefore necessary to wear non-absorbent outer clothing, made of plastic or waterproof material and in good condition. In warm weather waterproof clothing can be uncomfortable, but it is essential when handling 1080 solution. For all operations associated with the poisoning of bait, gauntlet-length rubber or plastic gloves must also be worn. Cleaning the hands before eating and drinking is also essential after 1080 or 1080-impregnated baits have been handled. Washing facilities must be provided for this eventuality, if the water is in buckets etc, then the water should be changed frequently.

The poison can be ingested through accidental contamination of food, smoking or it being mistaken for something else. In its stock solution (200g/litre of water) or when it is broken down with water (field working solution), it still only takes a small amount to poison a human being.