The human flea is found all over the world. Besides man, it infests cats, dogs, and many other domestic animals, particularly the pig. It breeds in profusion in pigsties, and people working in them can readily pick up large numbers of fleas and start infestations in their homes. The human flea is usually the most important species in farm areas. While the bites of the cat flea tend to be concentrated on the lower parts of the legs, those of the human flea may be generally distributed over the body (Keh and Barnes, 1961).

But generally speaking the human flea has become a rather rare insect in domestic dwellings, but in days gone by it was a constant companion to all classes of people, whether they be the beggar in the street, or Elizabeth I, everybody had an itch to scratch. The picture below is an old woodcut of fleas and lice infesting a bed circa 16th century. 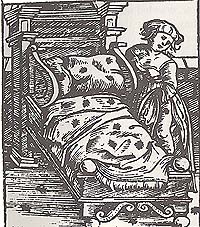 At one time the Chinese and others used flea traps made of ivory or bamboo which were gently warmed and placed between the sheets before going to bed, the idea being that the fleas would crawl into the traps and could then be easily killed.  In the 14th - 16th centuries ladies wore fur collars, now known as flea cravats (see below), which were supposed to catch fleas, which could then be shaken out.  Nowadays when one acquires a human flea, it is usually as a result of a visit to a pigsty.  The human flea also thrives on pigs and can also be found on fox and badger. 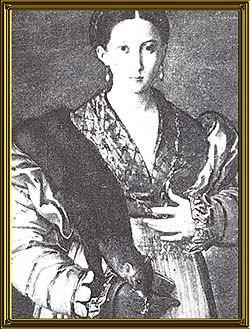 General Description of Adults: Fleas are small, black to brownish-black insects, with complete metamorphosis. They are wingless, having lost their wings in the course of their evolutionary development. Adult fleas are 1 to 4 mm long, depending on the species, and are laterally compressed. They have stout, spiny legs, adapted for leaping, and short, 3-jointed, clubbed antennae that fit into depressions along the sides of the head. Fleas have piercing-sucking mouthparts the principal elements of which are the grooved labrum and a pair of sharp, swordshaped mandibles. The concave inner sides of the mandibles, together with the labrum, form the sucking channel (Ewing and Fox, 1943).

The Flea Life Cycle: A female flea will lay 4 to 8 eggs after each blood meal, and can usually lay several hundred eggs during her adult life. The smooth, oval or rounded, light-colored eggs about 0.5 mm long, are deposited on, but not firmly attached to, the body, the bedding, or the nest of the host. Although they are a little sticky, those laid on the host's body may fall or be brushed off. This accounts for their being found in crevices in the floor, under the edges of carpeting, in sofas, or in cat or dog boxes, kennels, etc., where they usually hatch in 10 days or less.

The small, hairy, wormlike larvae, are whitish, with a distinct, brownish head, and do not have eyes or legs. They have 3 thoracic and 10 abdominal segments, with a single row of bristles around each segment. The larvae are about 1.5 mm long when they emerge, finally becoming about 5 mm long. They move forward by using their backward-projecting bristles and a pair of hooked, chitinous processes located at the end of the abdomen by which they can obtain purchase on a surface. When disturbed, they may "flip" in circles to escape. The larvae of some species require dried blood for food, but others do not. Those that do not need blood can feed on the many kinds of organic debris that are present in the crevices in which the eggs commonly hatch. They also feed on their own cast skins. They require high humidity.

Within a week to several months, the larvae grow through 3 instars (stages), then spin a pupal cocoon covered with grains of sand, dust, or organic debris, in which they are quite effectively camouflaged in their natural surroundings. The pupae are initially white but they change to brownish before the adults emerge. In the pupa, the appendages are not closely pressed to the body, and it has: the general shape and characteristics of the adult. Under favorable conditions, the adult emerges in a week or two, but under adverse conditions, the pupal period may be prolonged to as much as a year. The adult may remain in the cocoon for a long time until vibrations indicating the presence of a possible host stimulate it to emerge and become active.

The potentially long pupal stage, besides the fact that adult fleas can live without food for remarkably long periods, accounts for the fact that people may enter a house after it has been unoccupied by humans or pets for months, yet be rapidly and severely attacked by fleas. Depending on the species and weather conditions, 2 or 3 weeks to as many months, and rarely as long as 2 years, are required for many species of fleas to complete a life cycle.

Fleas most often bite people about the legs and ankles, and there are usually 2 or 3 bites in a row. The bites are felt immediately, but tend to become increasingly irritating, and are frequently sore for as much as a week. Flea bites may vary in their effects, from a transient wheal to prolonged symptoms that last for years, depending on the sensitivity of the victim. Children less than 10 years old were found to be more sensitive to the bites than older persons (Hudson et al., 1960b). The insects inject a hemorrhagic saliva that can cause severe itching, and repeated bites may produce a generalized rash. A small, red spot usually appears where the flea's mandibles have penetrated the skin. The spot is surrounded by a red halo, but there is never much swelling. Some relief from the itching can be obtained by applying cooling preparations, such as. carbolated vaseline, menthol, camphor, or calamine solution, or by placing a piece of ice on the affected area. For people who suffer severe allergic reactions, antigens are available that are sufficiently effective to cause the immunized person to be subsequently unaware of flea bites.

The most serious thing you can hold against fleas is their ability to transmit disease organisms. This ability is enhanced by their promiscuous feeding habits; they move from one host species to another. For example, the cat flea, Ctenocephalides felis, readily attacks humans, dogs, rats, opossums, raccoons, and foxes. The human flea, Pulex irritans, can be found on dogs, rats, pigs, mice, skunks, badgers, deer, foxes, coyotes, prairie dogs, ground squirrels, and burrowing owls. The species normally found on rats and ground squirrels also bite man.

The oriental rat flea, Xenopsylla cheopis, is the most important vector of the plague bacillus, Yersinia pestis, from rat to man but at least 29 other species of fleas can transit the disease including the northern rat flea, Nosopsyllus fasciatus; the mouse flea, Leptopsylla segnis; the dog flea, Ctenocephalides canis; the cat flea, C. felis; and the human flea, Pulex irritans. Plague is transmitted while the infected flea is feeding, by regurgitation of the bacillus from the flea's alimentary tract through the proboscis into the new host. Yersinia pestis is rapidly eliminated from the proventriculus of the oriental rat flea when the mean monthly ambient temperature exceeds 28 °C (82 °F), and plague epidemics decline with the advent of hot weather (Cavanaugh, 1971).

Thanks are due to Walter Ebeling for some of these notes
University of California
Division of Agricultural Sciences ©1975, 1996, 2002

Treatment and back to main Flea page 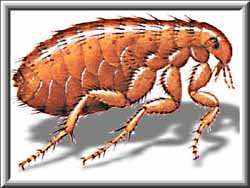